THINKING OUTSIDE THE BOX – PART II: A STICKY PALETTE

In this second instalment, we canvass a palette of options for adding colour and control to your mix bus.

Here’s the series’ philosophy: to get the most from in-the-box mixing, we must think outside it.
A large part of the analogue sound we have grown to love comes from the multiple subtle saturations and colourations imparted by analogue circuitry. It can come from many sources: tape, tubes, transformers, line drivers and summing buses, each with their own unique characteristics.

Last time, I suggested you try Klanghelm’s IVGI plug-in on some of your own mixes to hear the subtle thickening and ‘gluing’ effect a quality saturator can offer. But there is no one-stop-shop; no single magic bullet plug-in for your mix — like a studio full of analogue consoles, compressors, limiters and EQ units, that colour is achieved through layers and variation.

Think of it like peanut butter. While it might spectacularly compliment celery or chocolate, it doesn’t go with every meal. Likewise, if you have a favourite effect, resist the temptation to apply it to every track. The key is contrast and you should apply this principal to everything you do. Without quiet, there is no loud. And without clean, there is no saturated.

I use multiple types of saturators on my master bus to create the complexity that only comes from layering. The exact combination depends heavily on the music I’m mixing and I regularly use just one. Saying that, make sure you don’t leave those decisions too late in the mixing process. All colouration plug-ins will affect the tonality (frequency response) and dynamic response of a mix. Sometimes throwing one on at the end of a mix can improve it, but more often than not, it can significantly shift the balance of the mix, requiring a total rebalance. You need to know how the combination of saturation and compression will affect your tonal balance. Dynamics can come later when you get to volume balance and automation, but establishing your colour palette early is important. 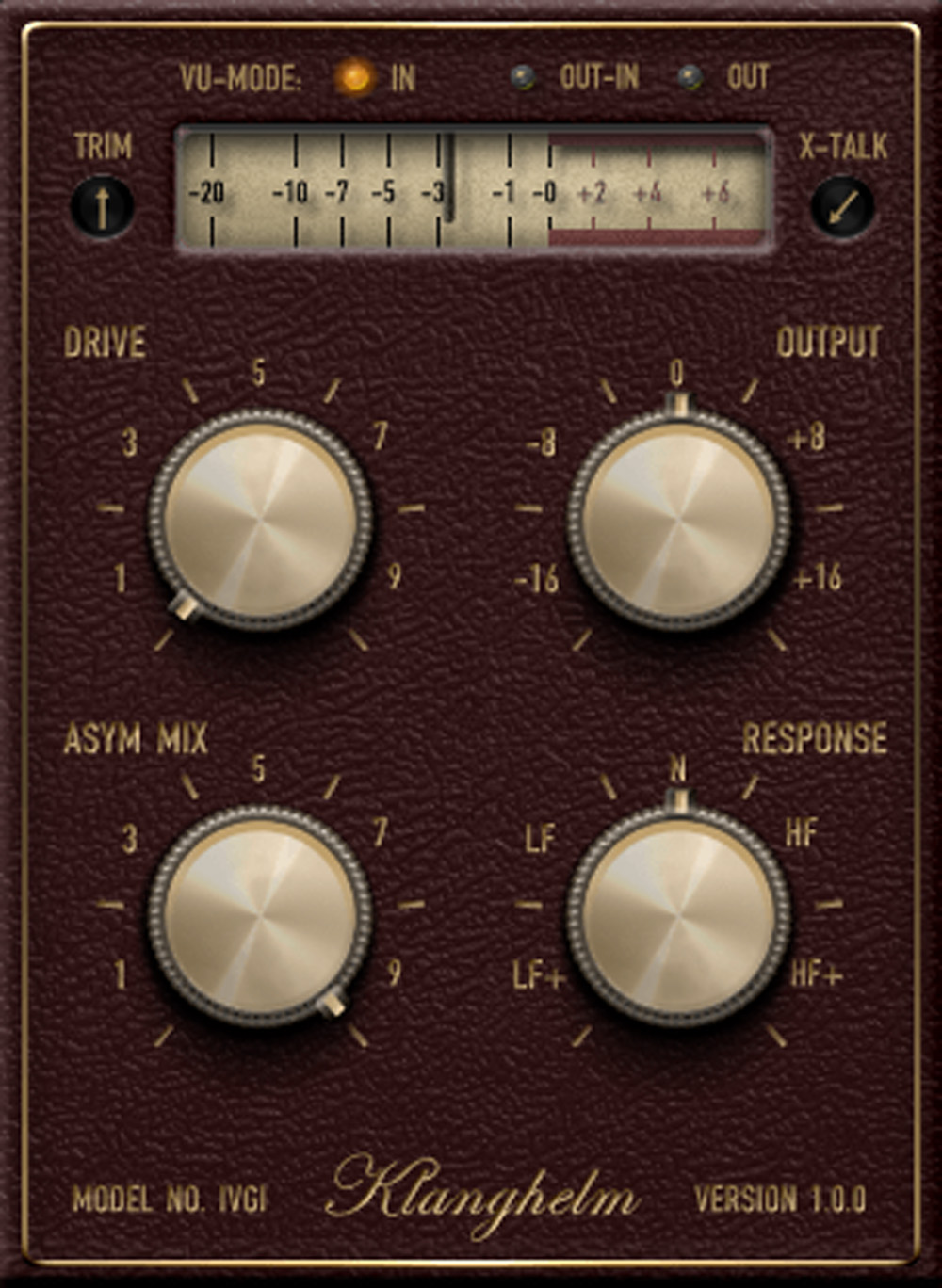 IVGI contains one of the four modules found inside their commercial product SDRR. I find IVGI lends a nice thickness to the upper midrange plus a very subtle boost to the low frequencies. The Asym Mix knob controls the transparency of the plug-in; maximum position is cleanest, minimum position is most saturated. And the Response control can ‘tilt’ your mix’s tone.

Saturn’s 16 algorithms do everything from gentle warming and saturation to utter annihilation, and the apocalypse comes in a variety of flavours. Saturn is also a multiband processor, meaning you can choose to saturate only part of your frequency spectrum, or even roll your own saturator by combining different types for different frequency ranges. Remember to enable the HQ button for oversampling (quality is increased, but latency increases along with it, so switch it off before attempting tracking). 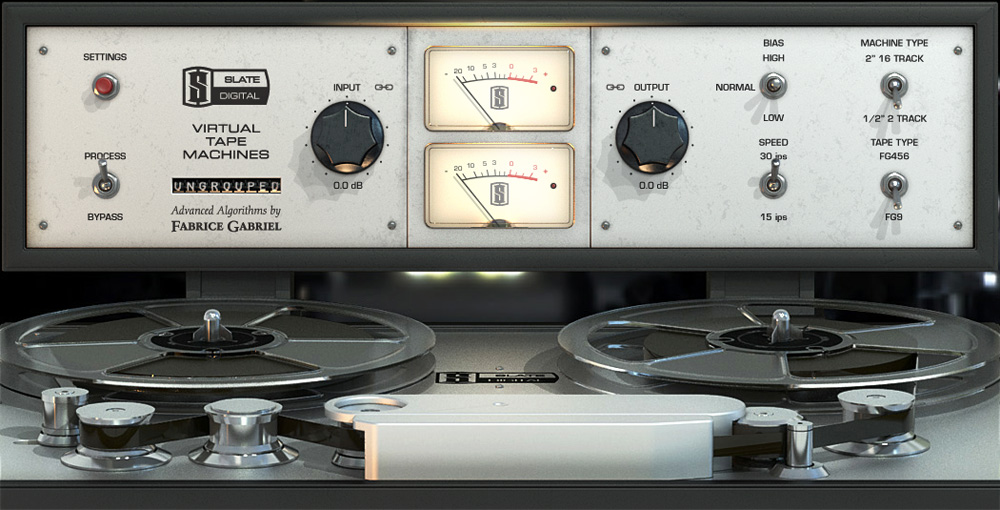 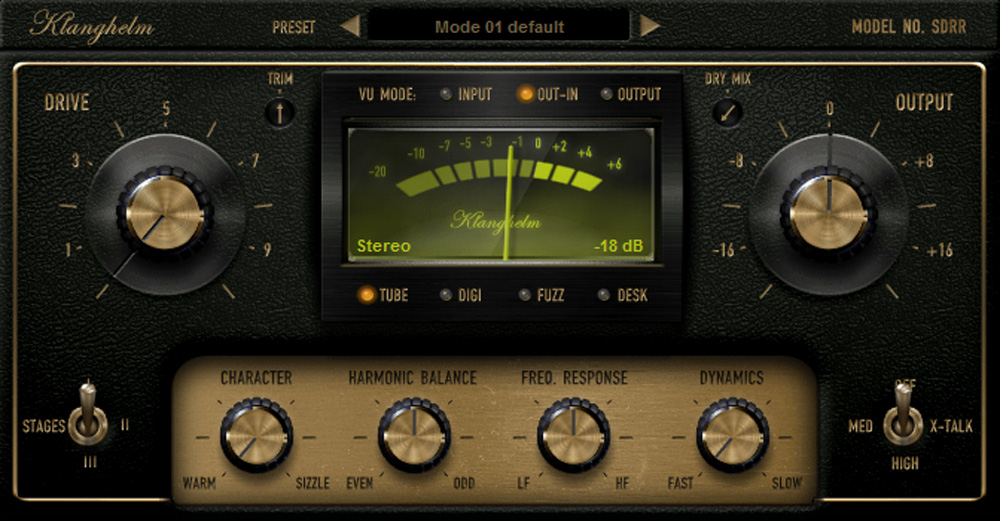 IVGI’s big brother contains not only a beefed-up algorithm, but also three other unique modes, all of which contain two algorithms which can be seamlessly blended to achieve the desired balance. If you want to add punch to a sound, this is your plug-in, but it is capable of far more than just that. With Tube, Fuzz, Digital and Desk modes, SDRR covers a lot of sonic ground. 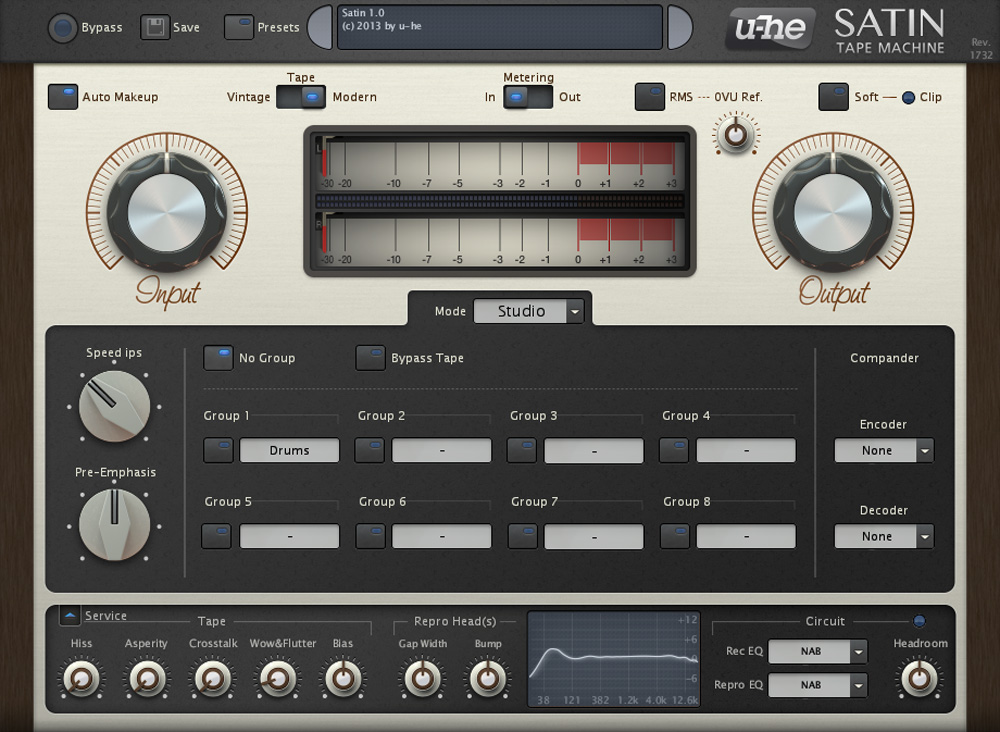 Already famous for some of the most flexible and ‘analogue-sounding’ virtual instruments, German developer U-he returns with the best-sounding tape emulator I’ve had the pleasure of beta testing. Satin will be available soon and features not only a very convincing tape machine capable of multiple sounds, but also a four-tap tape delay and a through-zero tape flanger. It’s a mix engineer’s dream for tape sounds.

Once you’ve decided on your colour, it’s time to look at dynamics. Most modern music makes extensive use of compression, both on the track level and the master bus. The SSL 4000 series consoles are rare pieces of gear we can label as truly iconic. Countless records have been mixed on this series and it’s helped define a modern sonic template for rock, pop and other punchy genres. All of which has a lot to do with the sound of its famous bus compressor.

When using a compressor on your master bus, start with a gentle ratio of 2:1. If you find you’re getting too much overshoot, this is probably a good sign that the tracks feeding the compressor are too dynamic and you don’t have quite enough compression at the track level. An attack of 10ms is a good starting place and should allow enough transients through while still controlling the dynamics.

Bear in mind there is never one setting for all songs. Every song is different and should be treated that way. And how you set your processors defines your sound so don’t be afraid to experiment.

I wouldn’t recommend new mix engineers use a bus compressor until they’ve mastered the art of mixing without. It’s very easy to get into a tail-chasing loop; turn up one track to get it above the rest, then turn up another track, and another… soon enough your gain reduction meter could be sitting at -20dB.

It’s not necessary to have a master bus compressor engaged if you’re shaping sounds during the early stages of a mix. But you should enable it whenever in the process you’re ready to start balancing your mix. This is especially important when you’re working on the loudest parts of a song since this is where the compressor will be pushed the hardest and you need to know how it will handle that; will the crescendo of the song be crushed at the master bus?

Speaking of things to avoid, I strongly advise against using limiters on the master bus during mixing. For the inexperienced, they have too much potential to do damage and the tail-chasing I mentioned above usually results in more severe sonic mangling than with a compressor. If you do use them for ‘safety reasons’, it is imperative that you ensure the levels entering the limiter stay below its threshold. 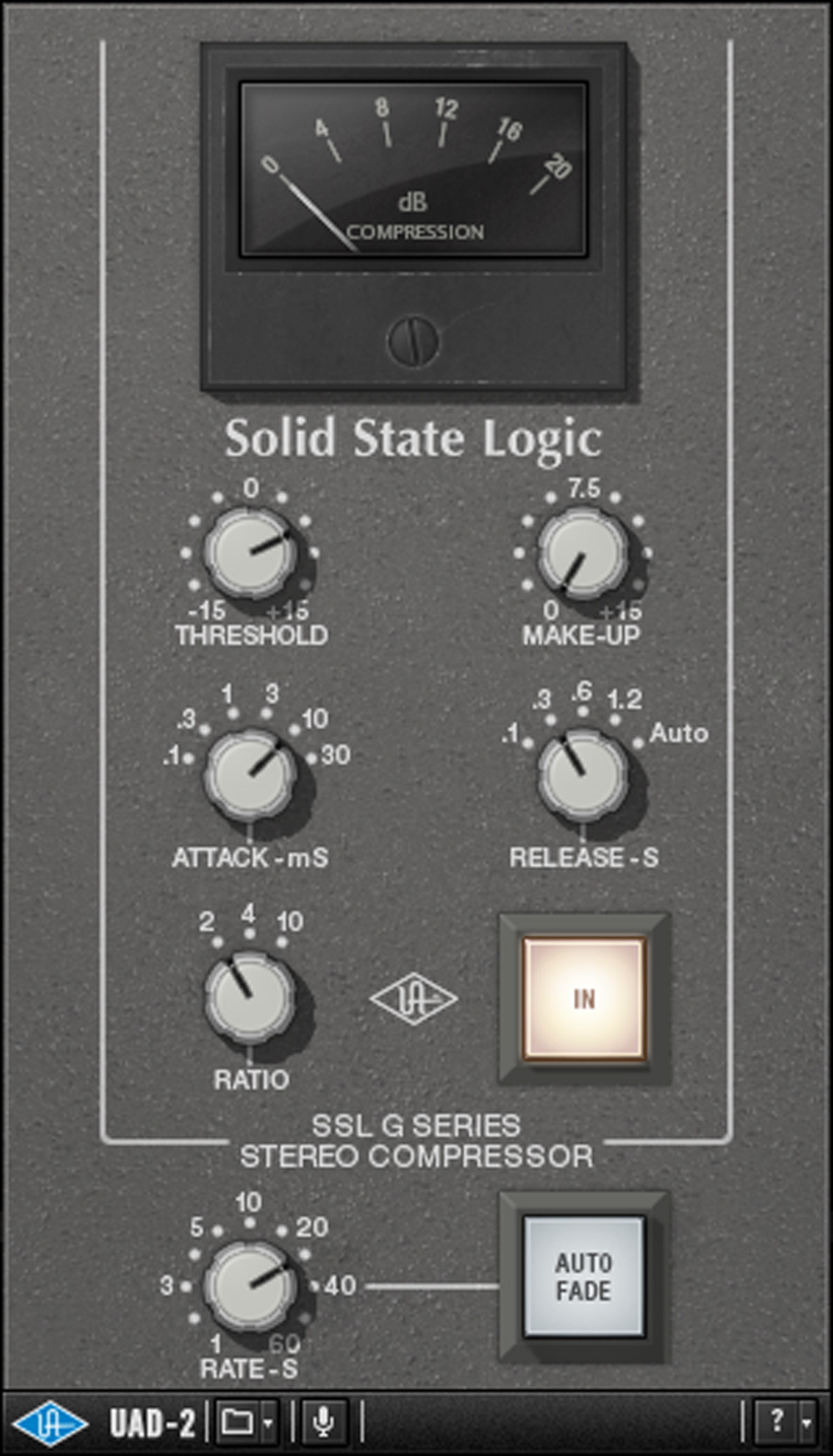 This is one of my favourite bus compressor plug-ins. Modelled on the iconic SSL 4000 G Series bus compressor (and authenticated by none other than SSL themselves), it definitely has a sound of its own. Not the most transparent compressor around and not suitable for all music, but it can certainly help you achieve some fantastic punch and focus in your mixes. 300ms release is a good place to start. Faster will produce a louder mix, but can very easily become too dense and fatiguing. Slow it down to 600ms for a less compressed, more open sound. 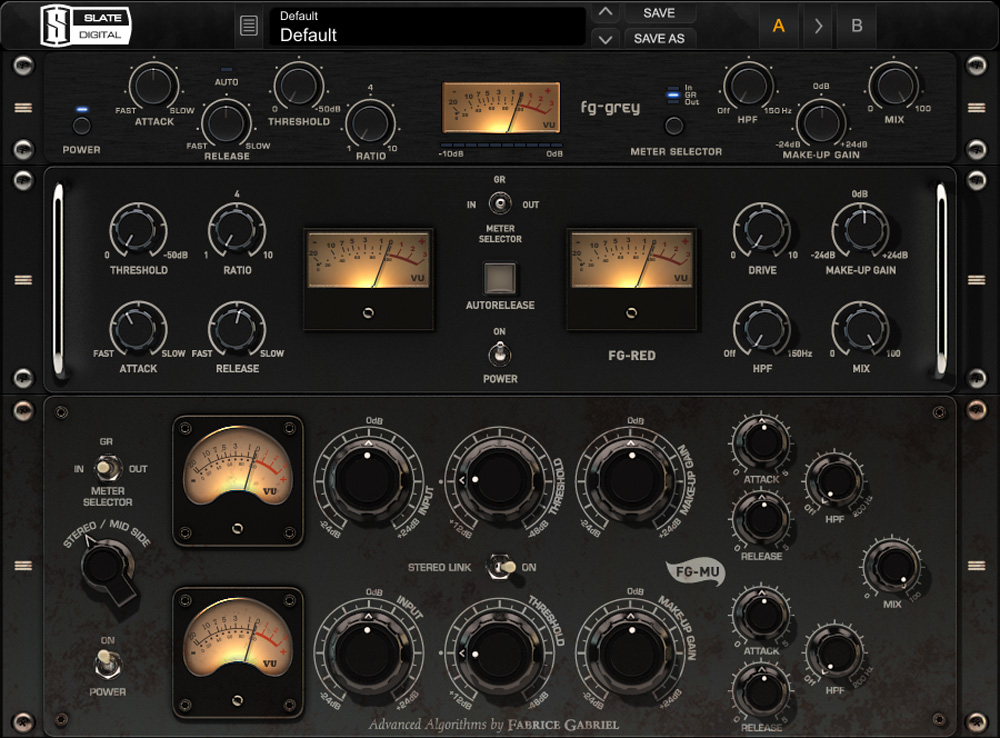 Virtual Buss Compressors (VBC) is a collection of three compressors that can be used individually or together in the ‘FG-Rack’ version of the plug-in. FG-Grey models an SSL 4000 G Series, but the addition of continuously-variable release and ratio controls gives access to in-between values not found on the original. FG-Red models a Focusrite Red 3 compressor, capturing the output stage transformers omitted on the currently manufactured incarnation of the Red 3. These transformers can be pushed harder with the Drive control to elicit more character. FG-MU is based on a Fairchild 670 tube compressor and it imparts quite sizeable ‘tubey’ warmth. 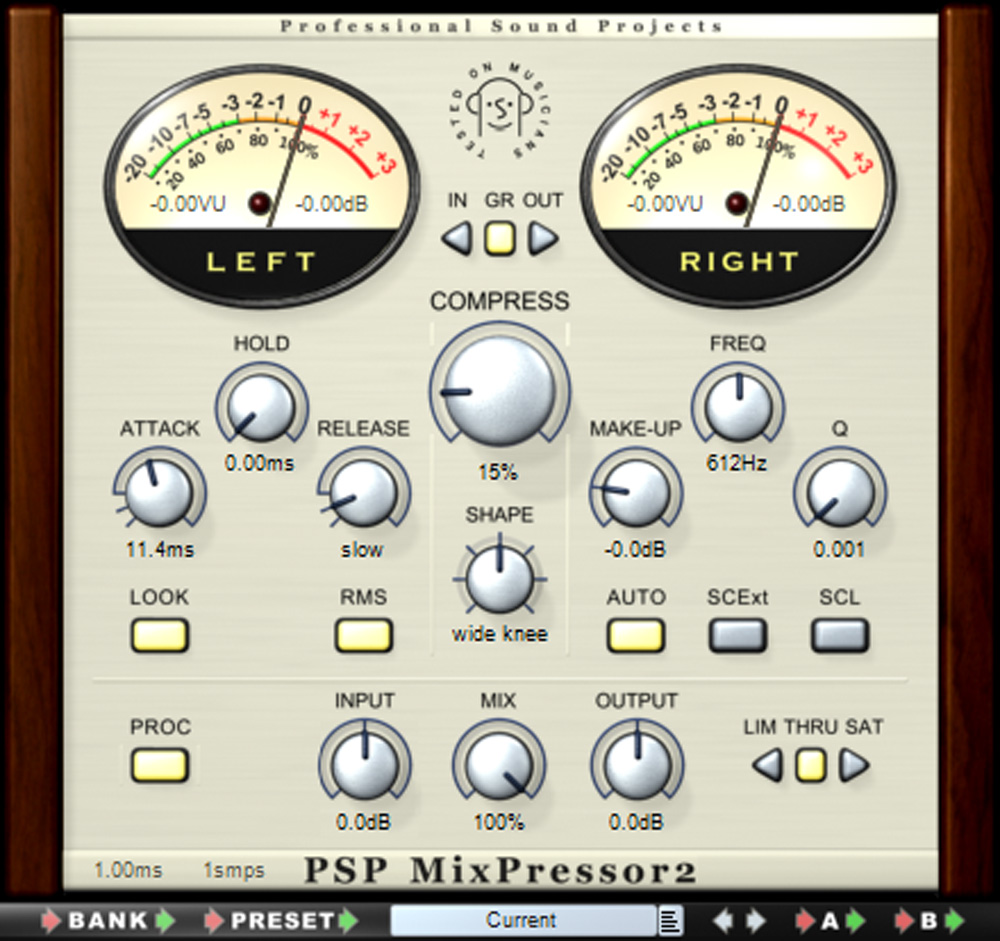 Highly under-rated, this plug-in comes as part of the MixPack2 collection. With its six knee modes and sidechain filtering, MixPressor2 is capable of a range of different sounds from hard edged to very soft compression. Make sure to set the output mode to Thru to avoid further limiting which is best left for mastering.

Heralded as the second coming of SSL’s classic bus compressor, The Glue is a more flexible beast offering an adjustable sidechain filter to avoid pumping effects caused by low frequency signals, plus wet/dry mix and gain reduction range controls not available on the original SSL unit.

One of the most transparent compressors I’ve ever heard, this plug-in is particularly suited to acoustic or orchestral music due to its extremely low aliasing artefacts. One interesting design feature is that only the compressed portion of the signal is oversampled. This leaves the original signal completely untouched and contributes to the plug-in’s transparency.

So is all this master bus processing the same as sending your tracks off to a mastering house? In short, no. There are unique roles a good mastering engineer plays in the production of your projects, things you probably can’t do yourself. Here are some reasons:

1) It’s generally accepted that you shouldn’t master in the same room you mix. The reason is any flaws in frequency or transient response in your listening environment (the combination of your speakers and room) will only be compounded if you attempt to master there. You can’t fix what you can’t hear, and mastering in a different space may allow you to hear problems that need correcting.

2) Mastering engineers spend much time and money establishing a superior monitoring system and listening environment. It’s not just big, expensive speakers, but also carefully planned acoustic treatments to create an accurate, full bandwidth listening room, and the ear-training that comes with years of acute listening and experience with multiple musical genres. Having on your team an experienced listener who is also an experienced communicator can help you derive the best possible outcome.

3) The over-arching role the mastering engineer plays is that of quality control. It’s their responsibility to ensure the final product is free from technical flaws. Mastering is the final chance to catch anything that may have been missed earlier in the process and, as such, it is an exercise in risk management and quality assurance.