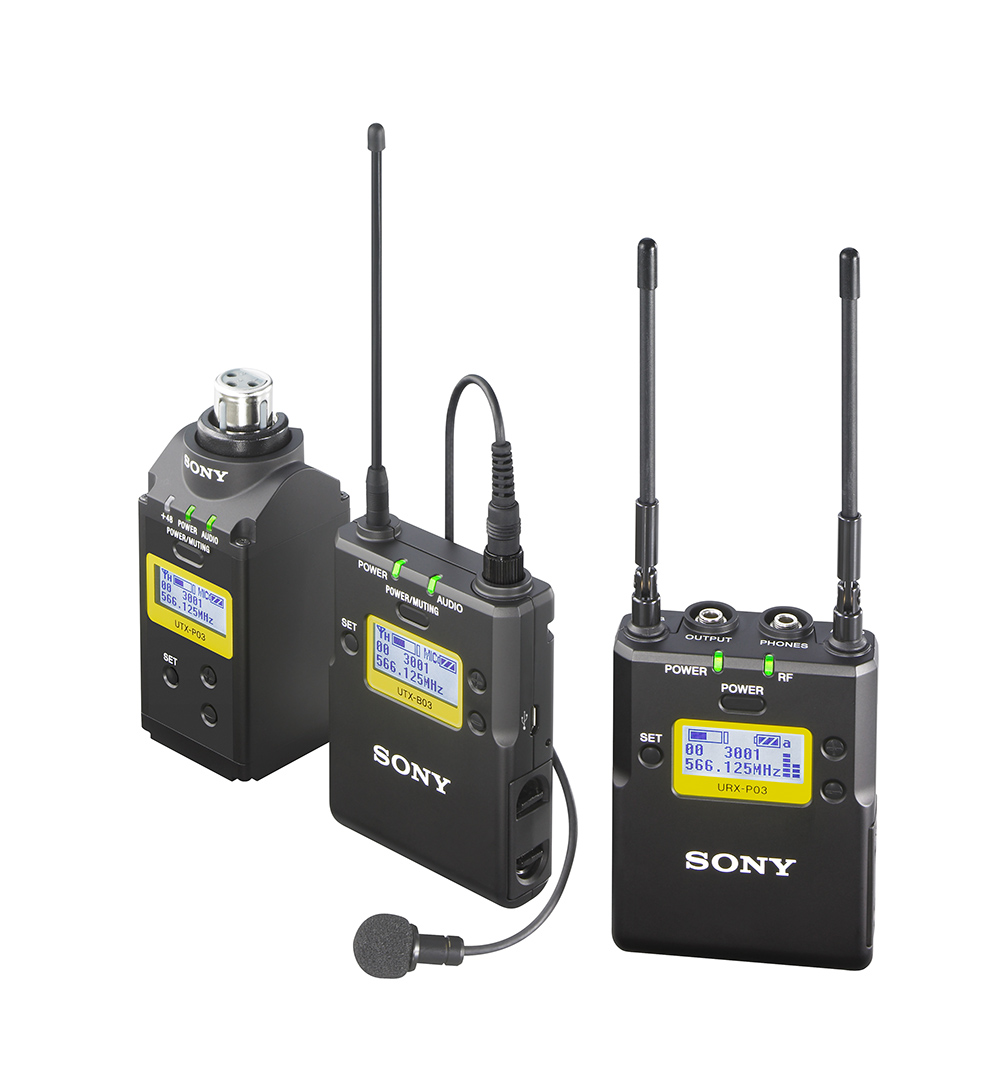 Sony has updated its UWP series with digital conversion, and added a bunch of professional features while it was at it.

Sony’s UWP line of camera-top wireless audio products has gone partly digital, with the UWP-D series, and it’s a good move. Sony’s UWP-D series strikes a middle ground: It converts signal to a digital stream, but transmits analogue, before converting it back to digital, then outputting analogue again at the end of the line. Confused yet? While it takes a few processes, it’s a good way of getting around the limitations of purely analogue transmission that lower cost systems generally struggle with. Other higher-end systems have been using this hybrid system for a while, with good results, and Sony has decided to add it to the quiver.

THE KEY TO CLARITY

The ‘keys test’ (yes, jangling keys in front of a wireless mic) has been a good assessment of how well, or just how badly, analogue wireless systems handle compressing and then expanding a signal, which they have to do because of a limited dynamic range. Usually, they suck at it. Something about this gnarly mix of jangling metal on metal completely undoes analogue compansion. Whether it’s the barrage of transients, the jumble of high frequency noise, or the supersonic 30kHz fundamentals, analogue systems hear key chains coming a mile away and got to pieces. The racket that comes out the other end sounds like an analogue translator nervously rustling a packet of chips.

Only the very best seem to survive the test, whether by dual-band companding or with variable ratio companding, but that’s changing with digital. If you turn something into 1s and 0s, technically, you can keep as much dynamic range as you can sample. So while on one hand digital TV conversion is completely wreaking havoc on the wireless spectrum, digital audio conversion is the biggest progress leap in the wireless world.

The UWP-D system uses Sony’s digital audio codec and samples audio at 24-bit/48k quality. I have considerable experience with Sennheiser G3, and currently get around the traps with Shure UR gear, which is a great analogue UHF-R system. I’ve never had them fall over, and they don’t have any breathing issues or fail the key test, but they’re also between two and three grand a set.

Sony UWP-D systems with a single receiver and transmitter come in under a grand, while the dual transmitter UWP-D16 set (bodypack and plug-on transmitters) is $1249 — which is the pack I had on review. So, the question is, how good are they?

Build quality is a big part of a wireless system’s longevity. They get mistreated, sweated on, and dropped more than any other piece of audio gear — except perhaps a pub SM58. The UWP-D units’ all-metal construction is reassuring, the only plastic bits are the removable battery caddy, which securely fastens into the side of the units. I don’t mind this configuration, as opposed to a battery door, because the batteries are easier to change when you don’t have to fiddle with the unit while it’s attached to a camera. All of the units can be powered by USB too, if you use an on-camera supply or a phone supply handy. No mention of waterproofing, but I wouldn’t expect it at this level.

Both units also have screw-in, locking input/output connectors, which is a necessary professional touch. As well as a balanced output — with included 3.5mm jack and XLR adaptors — the receiver also has a 10mW headphone output. It’s great if you’re just using a single camera-top wireless system on a DSLR and don’t have any monitoring.
The screens are also a little bigger than the previous series, easily reproducing three lines of information; you can always see transmission/reception level and health, battery life, group, channel and frequency settings at a glance. They’re also bright with a range of contrast settings easily viewable in daylight.

Both units have LEDs to show power, while the receiver has a second displaying RF strength: Green means you’ve got 25dBu or more input level, but if you see red, you’ve dropped below that mark. The red indicator gives you a bit of leeway before your signal drops below 15dBu and off the planet, but in daylight the LEDs aren’t that bright, so you’ll want to keep a close eye on that one.

The Sony receiver has two antennas for space diversity. And because the unit can be mounted on top of a camera with the provided cold shoe adaptor, both antennas are completely posable (to get them out of the way) and flexible. The bodypack transmitter has a single flexible antenna with good cable relief. Though neither are removable/easily replaceable, both antenna types seem flexible enough to avoid damage.

On the transmitter, an LED shows signal presence to help reduce the amount of time tail-chasing when you’re not getting signal. In a long walk test, both the Shure and Sony started dropping out at around the same time, which was well down the street. I never really had a problem with the Sony’s reception, its tone squelch circuitry and true diversity systems seemed to keep it on track.

The Sony wind muff clips neatly over the head of the supplied lavalier, but it was a little underdone out in the elements. The Shure was superior in light to moderate wind, but also much larger and took a little top end off the mic. But I’d rather have usable audio that was a bit dull, than blustery takes. I’d keep a few different socks on hand if you were heading outdoors with the Sony.

The best and most useful feature that seems certain to turn heads is UWP-D’s wide switching bandwidth. For a lower cost system, it far outdoes the 24MHz bandwidth of the older UWP-V series and other similarly priced offerings. Depending on the country you’re buying in, you can have access to up to four carrier frequency zones. In Australia you have the option of two: a 64MHz zone from 566.025-629.875MHz, or 56MHz in the upper area of 638.025-694MHz. Either way, that’s enough to get you around all the major capital centres in Australia, with only Gold Coast and the Sunshine Coast presenting a problem for the top zone. It’s a lot of bandwidth for a portable system, and great for news crews travelling the country.

Also at a professional level are the five ways you can set your desired frequency. After setting the desired operating band (a subset of your available frequency range), the most accurate but tedious method is to scroll through each channel by degrees of 25kHz until you land on your pre-coordinated frequency. The tightness of channels (up from 125kHz in the UWP-V series) is helped along by a crystal-controlled Phase Locked Loop synthesiser, which keeps the user-selectable frequencies stable. The second method is to make use of one of seven preselected groups in each band. Pre-selected groups allow you to set up multiple transmitter/receiver combinations (up to 16 in some groups) without any intermodulation problems. Thirdly, if you’re struggling to find a place to park, you can do a Clear Channel scan which lets you riffle through the spectrum to find clear air. Active Channel Scan does the opposite, searching for channels showing activity within a band, letting you pick up on the available transmitter feeds in the area — hopefully one of them is yours. The most obvious and quickest method, Auto Set, picks the closest available channel and starts a sync with your transmitter.

The modes cover every option, and the extra bandwidth for finding clean air is great, because hybrid systems tend to require more signal above undesired RF. Once you’ve arrived at the desired frequency, Sony has added infrared to sync units in a flash.

This Sony system reproduced voice very well, and was especially good in the mid range. Sometimes I find wireless lavaliers sound a little more barky than the natural voice, but didn’t have that impression with the Sony. It wasn’t flawless — the Shure still seemed to handle the keys test a bit better despite being analogue — but the Sony held its own in normal use. Hybrid digital/analogue systems have four conversions stages to go through before they hit your camera/recorder, which is where the difference in quality can lie. You can also step up in performance by grabbing a higher-end lav from Sony. The Sony’s default level settings were similar to the Shure, which I find to be a good average speech level. You also have output level adjustments between -12dB to +12dB in 3dB steps, so there’s plenty of range to hit your preamps with good level.

With lower end digital systems, the tradeoff is usually they operate up in the 2.4GHz band, and have to use a lot more error checking techniques to avoid getting caught out by someone’s wi-fi signal. The cost of that vigilance is time (latency), and that can cause problems, especially for anyone listening to their feed on in-ears. Amazingly, Sony’s quoted delay for its multi-stage conversion is a mere 0.7ms. That’s astounding, and in use, I couldn’t detect an audible delay. So that’s a big tick.

Another handy feature is the system’s backwards compatibility. Because the UWP-D uses a hybrid system, as well as using the standard digital compander you can also choose compander settings compatible with analogue UWP and W800 series transmitters. It’s great in a pinch if you’ve got older Sony transmitters around. Battery life is also good, with eight hours on the bodypack transmitter with a couple of AA alkaline batteries, and six hours on the receiver. You can also use rechargeable batteries.

The Sony UWP-D series is great value for money, and has enough features to keep professionals happy. Also of note is the recently announced adaptor for Sony’s Multi-Interface shoe which pumps audio straight into Sony’s new camcorders and grabs power from the camcorder battery. Worth buying into if you’re starting out, or grabbing as a backup for existing units. NEW UPW-D IS A SHOE-IN FOR SONY