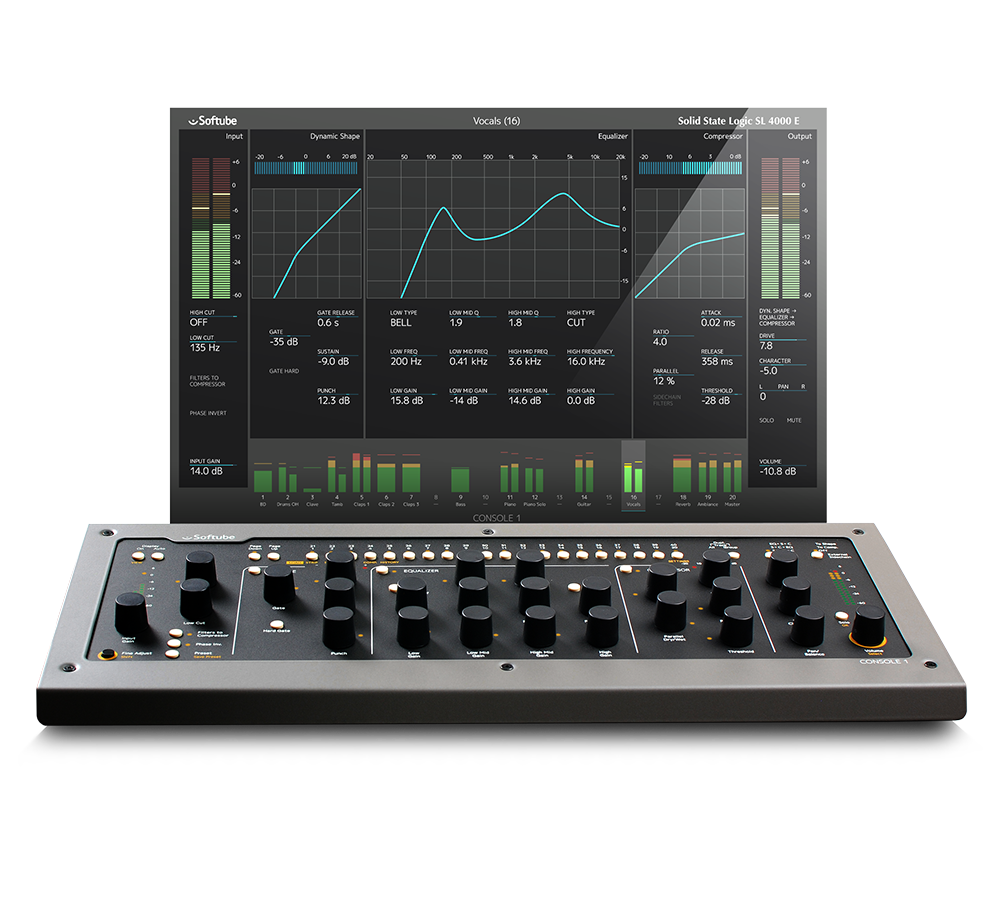 I’m a bit of a control surface nut, as some of you may know: ICON specialist, C24 enthusiast, Artist series owner and thrasher, and automation junky. So consider me intrigued when Softube — manufacturer of some darn lovely plug-ins — announced what looked to all intents and purposes a proprietary control surface, only to read time and again that it’s not a control surface.

My first impression on removing it from the box was that it’s surprisingly heavy (so it must sound good). Metal construction and knobs that are soft to the touch, but firm when turned. Slightly sepia yellow LEDs and warm colours and tones give an industrial meets retro feel. I ran the installer, plugged in the USB cable and ‘hey presto!’ I got my first glimpse of the pop-up window that shows the Console 1 SSL 4000 E plug-in.

In order to integrate its hardware into multiple DAWs consistently (the system works in VST, VST3, AU and AAX formats) Softube elected to use a ‘plug-in within a plug-in’-type architecture — ie. you load the Console 1 effect inside your DAW of choice, and are confronted with a nearly blank deffault GUI.

The plug-in can be driven with a mouse but the whole idea of this combo hardware/software system is to ditch your mouse and keyboard and embrace console-style mixing that so many lust after. Consequently, inserting the plug-in creates a link to the hardware, which has 20 numbered buttons running along the top telling you which instance within your DAW you are currently operating from the ‘surface’. Basically, you load up instances of the Console 1 plug-in across your tracks and then hit button 3 on the hardware to access plug-in 3 on channel 3 in your DAW, simple and very quick once you get into the rhythm of it. You can use unlimited banks of 20, depending on how much juice your computer has.

If you want to see the user interface for the plug-in you can either hit the Display On button and arrange it somewhere on your desktop permanently, or use the latching Auto button next to it — in the latter mode, any time you turn a control on the hardware the Console 1 interface pops up on your computer screen to provide visual reference beyond that on the controller. Console 1 currently does not display your DAW track names in its onscreen display, but Softube is working on it with select manufacturers. In the meantime you can retype your track names into the software to make it easier to operate rather than relying on numbers alone. This comes in handy if your preferred mixing template has a few submasters throughout it, VCAs, or channels you don’t want to run the Console 1 plug-in on. By naming the channels, it prevent things getting confusing and out of numerical sync.

The actual Console 1 plug-in that the system controls is a top notch addition to any in-the-box mixer’s arsenal. Not only does the sound so closely emulate the famed SSL 4000 E that SSL is happy to be associated with it, but the features take the SSL channel strip to a new level of flexibility.

Console 1 has three main sections: Shape — with a gate and transient shaper to adjust attack and sustain; a four-band parametric EQ; and a Compressor. And the signal flow can be switched three ways; between EQ-Shape-Comp, Shape-EQ-Comp and Shape-Comp-EQ. Also, if you happen to own any other Softube EQ or compressor plug-ins, those can be substituted into the Console 1 channel strip, making it significantly more flexible.

Importantly, you can bypass each section, and when turned off they all save on processing power. CPU usage in ProTools 11 was very light, and by default the plug-in instantiates with all sections bypassed.

Bookending the main sections at the input end are High and Low Cut filters (switchable to the compressor’s sidechain), phase toggle and pan controls. On the output side there is a pot for volume control in addition to Softube’s Drive, allowing the SSL’s modelled sound to be enriched even further. The Drive section also has a character pot, so the tone of the saturation can be adjusted from smooth to aggressive depending on the results you’re after.

The compressor section has a handy wet/dry control for easy parallel processing. And the combination of the filters and four-band EQ, the Shape section with its ADSR abilities, and the Drive section’s bite mean you have tremendous control over your material in a mix. It certainly does enough sonic sculpting to minimise reaching for a mouse to operate alternative plug-ins in your DAW.

Any sort of hands-on control is good in my books. The Console 1 has a simplicity of operation that makes it very quick to learn and fast to use, particularly if your automation needs are quite simple — as in broad brush strokes of automation coupled with complex editing, which has worked for many in our industry for years and makes for great ‘craft’.

Personally, having used more complex control surfaces in a post environment I found the Console 1 a bit limiting in a couple of ways. For only $350 more I have an Artist Control sitting on my desk which, rather than forcing me to work the way Softube wants, is extremely flexible, with user-definable touchscreen and layouts. And the EQ and Dyn mode allows any plug-in in your DAW to populate the eight pots. The Artist Control will also follow your track selection within your DAW, making the 1-20 buttons on the Console 1 redundant.
On the flip side, the Artist series can be quite flakey and the feel of that controller doesn’t give you much confidence it would survive a trip in a bag compared to the Console 1, which feels very robust. This feel difference is most obvious when it comes to actually turning a knob to control a parameter. Softube has done brilliant work on the ballistics of the Console 1 knobs and the responsiveness of its software — you really can imagine you are turning the black topped EQ that this system is based on. It’s an illusion that would quickly fall apart if you were using an Artist Control with its plastic-feeling little knobs. Also, there’s no sexy SSL E series plug-in included with the Artist Control, and communing with both the Softube and SSL eco-systems is after all a very pleasant state of being.

The Console 1 will almost definitely change the way you work. The proprietary nature of its integration means you’ll likely use Softube’s plug-ins for all your EQ and dynamics requirements just to use your hardware controller. Only your reverbs, delays and go-to creative plug-ins will reluctantly drag you back to mouse control. It’s fairly straightforward to think of these processes as two different stages in the mix, firstly pulling the dynamics and tone of individual elements together quickly using Softube’s system and then switching over to your mouse and DAW for the more macro job of mixing all the elements together, adding space and interest to finish your mix. After a few hours it’s easy to see past the limitations of only using Softube’s plug-in on the surface precisely because it works so well doing what it does.

Currently the Console 1 only works on OS X, but Windows users are assured that support is on its way. If you’ve never used a control surface of any kind and are looking to shift away from mixing on a keyboard and mouse to something more left brain, I heartily recommend checking this system out. MAJOR UPDATE FOR SOFTUBE’S CONSOLE ONE