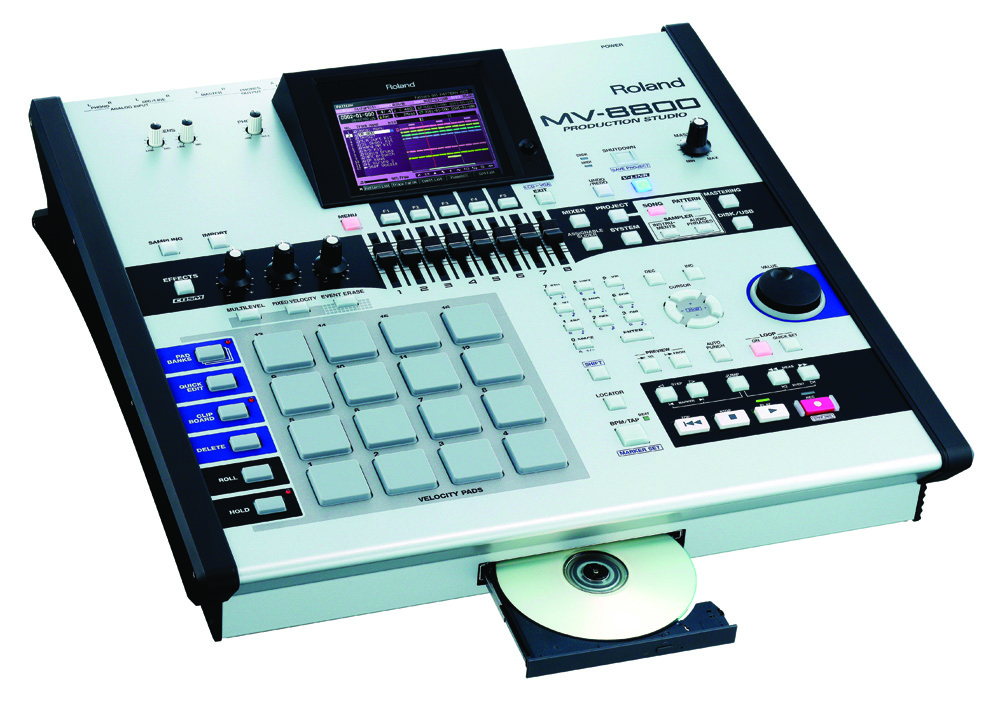 Whether it’s ‘Most Valuable’ or ‘Most Versatile’, the MV8800 is here to stay.

It’s been a tough fight out there for the last of the hardware samplers – and the final battleground is without doubt the MPC-styled production centres first realised by Akai with the MPC60. Every other flavour of hardware sampler has been systematically replaced by the plethora of software variants available.

The MPC platform was first envisaged as a joint design endeavour between Akai and Roger Linn – Roger developed the system after his own Linn 9000 drum machine. Over the years, the MPC lineage became the stalwart of hip-hop and R&B producers, citing the rock-solid timing and intuitive operation as the main reasons for its success. And while Roger Linn bailed out of the amalgamation after the third model (MPC3000), Akai has continued the breed to this day, with a range of MPC-inspired samplers to suit most budgets.

On the other side of the field, and no doubt wanting a share of the remaining hardware sampler market, Roland released its own idea of the concept a few years back with the MV8000. The MV won a lot of friends in both Europe and the U.S. almost immediately and not long afterwards, Akai Professional was requisitioned into the DJ-centric Numark stable. Unfortunately, Akai dropped the ball on its MPC support leaving a lot of users in the dark as to further software development of the flagship and somewhat bug-ridden MPC 4000.

With the smell of opportunity wafting through the air, Roland has seen fit to offer a revamp of the MV8000 – the MV8800. On initial inspection you’d assume little has changed from the MV8000 but under the bonnet there’s been a complete revamping of the PCBs to comply with the 2006 European Union’s RoHS standards (Restricted use of Hazardous Substances). Of course, thousands of manufacturers have had to embrace non-hazardous materials such as lead-free solder to comply with the new European standard, and a lesser product may have been shelved rather than rebirthed within the framework of these so-called environmentally friendly standards. At the same time, Roland has decided to include what were initially optional extras on the 8000.

For starters, the VGA card is now a standard feature with the 8800. Hooking up a VGA monitor is as simple as it gets with a standard 15-pin VGA output. The VGA card includes a mouse port and Roland also supplies a nice optical model for accessing menus and editing. This really makes a huge difference when it comes to driving the unit, with computer-style menu access to all the MV’s parameters and edit windows. If I’d seen this in action when I reviewed the original 8000 [Issue 31] I’d have suggested it as a prerequisite. Fortunately now it’s standard, which gives you a computer-style editing vibe without the crashes you’d expect from a computer. Using the VGA mode does remove the editing windows from the built-in LCD screen, admittedly, but all commands can still be accessed via the MV8800’s buttons. Incidentally, the built-in LCD screen is also now a colour unit, as opposed to the 8000’s greyscale screen, which adds a nice touch.

The MV8800 unashamedly borrows its design from the MPC – there’s no denying this point. The work surface’s layout is similar too. There are 16 large velocity- and aftertouch-sensitive pads off to the left, transport buttons to the right accompanied by a data wheel, navigation keys and an alphanumeric keypad. This is one of the nicer aspects of this format of instrument. There are ‘real-world’ controls and data input methods ergonomically presented. To the left of the pads are buttons to instigate a held note or to trigger a roll on a pad. You hold the ‘roll’ button and that’s what you get – in time with the current tempo. Moreover, because the pads accept aftertouch, you can vary the volume of the roll according to pressure applied to the pad. Stretching towards the centre of the MV there are eight 60mm faders. These faders control levels for the eight stereo audio channels – a trick not found on the Akai models. These are linked to the eight record tracks but can also be assigned to drive any continuous MIDI controller messages. To the left are three controller potentiometers, assignable to a swag of chores. Pretty much every other button across the top panel has a dedicated function, so you’re not fumbling with multiple button presses and cryptic ‘layers’ of operation. Operation becomes fast and furious once you’ve spent a few days with the MV.

Operationally, the editing system follows a similar design to the ubiquitous Cubase model. Recordings to the arrangement-style window occupy up to 128 MIDI tracks. The sequencing resolution is 480ppqn and tempo can be quickly adjusted via a front panel tap button. Being a 16-part multitimbral device, any of the sequencer tracks can play any of the 16 loaded patches or control up to 32 MIDI channels of outboard via the two MIDI outputs. Recordings can be executed in either real or step time and then edited via an event list or the Cubase-esque piano roll editor. 300,000 MIDI events can be sequenced, with the ability to record and playback with or without quantising. Quantising swing is possible, of course – notes can be pushed and pulled according to any quantise strength percentage. If you’re concerned with how funky the swing functions are you should have a play with the MV before deciding between this and other similar units. It won’t disappoint.

The remaining eight stereo tracks are reserved for direct recording of live instruments or ‘audio phrases’ – triggered phrases created from playback of loaded patches. The 8800 will even sync record audio to the sequencer’s BPM without changing pitch. Punching in and out of record is just as you’d find on any eight-track recorder. Recordings are not, however, made directly to the internal 40GB hard drive – they’re always stored to internal RAM (up to 512MB) and then to the hard drive when you save your project. Recordings and samples are all stored as 16-bit linear/44.1k data, even though the A/D, D/A converters are 24-bit.

Missing from the 8800 is the floppy disk drive, which, although disappointing, is a sign of the times. The CD-Rom drive, however, can load audio CD data, WAV/AIFF, ACID files, S700 data, AKAI MPC2000, SND files, AKAI S1000/3000, SMF (MIDI files format 0 & 1), still images such as BMP and JPG files and of course MV-8000 Patch and Project data. Why load picture files? Well, the 8800 features the ability to playback up to 16 images via the VGA output. These can be assigned to the 16 pads or to sequence parts for automated playback. Cute, but not really a function I’d be bragging about. Despite losing the floppy drive, the MV8800 does do a much better job of connecting to an external computer via USB. With the 8000 model I had trouble with this protocol, which could well have been due to both the MV8000 and the state of the Mac operating system back then. Now USB transfer is rock solid and doesn’t require a computer reboot each time you disconnect from the MV.

The still-optional MV8-OP1 card adds six analogue outputs and S/PDIF input as both optical and RCA coax. This also features Roland’s R-Bus port for connections to other R-Bus devices. R-Bus is an interfacing system that seemed destined to go the same way as Yamaha’s mLan, but Roland has persevered. After a little homework I discovered an interesting unit from PreSonus that will link R-Bus units to your computer via Firewire. The V-Fire looks like a must-have for those combining the MV with their established computer tracking systems as it will allow 16-channel transfer of the MV’s output directly to your Mac or PC. Combine the MV8800, the V-Fire and a laptop and you’ve got one hell of a production rig.

A bucketload of Roland instruments and effects models are included in the 8800, including the classic TR-808, TR-909, SRV reverb, SDD-320 Chorus, SBF-325 Flanger, Boss BF-2 and HF-2 flanger and RE-201 Space Echo. This is a vast improvement over the somewhat barren set of instruments supplied with the 8000. There’s enough here to keep everybody ‘in the house’ until you start branching out into the huge array of sounds you can import from the countless Akai libraries out there.

Roland certainly had a great machine on their hands with the MV8000 and the release of the 8800 shows they’re still committed to the cause. The unit sounds very professional and now, with the standard VGA output, I think anyone considering the MPC format owes it to themselves to check out the 8800 – a killer machine that could well take over where Akai left off.