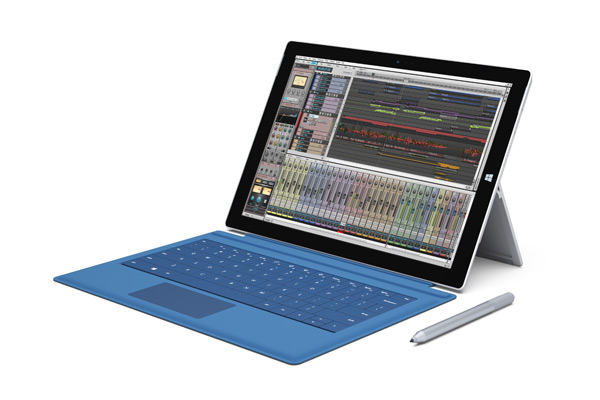 Microsoft Surface — in touch with audio? We give you the lowdown.

In the last couple of issues I’ve pointed out the perils of buying third party laptops/tablets for audio, and extolled the virtues of the good ol’ PC desktop for same. However, there is a third path, and that’s buying a tablet direct from Microsoft. As I explained in AT108, generally the big problem with laptop/tablets is that you don’t know what array of components they contain, or whether any of these (and their associated software drivers) will interrupt your audio stream and cause clicks and pops in your recordings, without the ability to disable them and cure such issues. Well, now that Microsoft has its own Surface range of tablets, we finally find ourselves on level pegging with our Mac brethren. Because just like them we are being offered a device with a fixed and well-known specification, with hopefully no unpleasant surprises in the audio department.

Although there is already speculation about Microsoft’s Surface Pro 4 being released in late 2015 or early 2016, the current models to look at are the Surface Pro 3 range and its cut-down cousin the Surface 3. The significantly cheaper Surface 3 has a slightly smaller screen at 10.8-inches compared with the 12-inch of the Pro, is certainly lighter and has a slightly longer battery life, but also has reduced performance. Its Intel Atom 1.6GHz quad-core CPU and 2 or 4GB or RAM is likely to run perhaps two thirds as many plug-ins as an i5 Surface Pro 3, but if your audio projects are fairly modest then it could still be a candidate. It could also be a sensible choice as a portable multitrack recorder for live gigs when you don’t need to run real-time effects.

The Surface Pro 3 is currently available in five versions ranging from a 64GB storage Core i3 model which I would personally avoid for audio duties, through 128GB and 256GB versions with a Core i5  (rather more like it), to 256GB and 512GB with Core i7 — best of the bunch for running a sizeable number of plug-ins and softsynth voices, if you can afford the premium price. Their CPUs run, depending on the particular model, at between 1.5 and 1.9GHz. All Surface 3 models are now shipped with Windows 8.1 (the previous and ill-liked Windows RT is now defunct), so you can install and run the vast majority of Windows desktop software without any restriction. You’ll also get a free upgrade to Windows 10 when it’s launched.

Microsoft’s Surface 3 and Surface Pro 3 only have a single USB 3 port, but adding an inexpensive hub (preferably a powered one) will give you more I/O flexibility, such as being able to plug in an audio interface, external hard drive for backup, iLok dongle, and so on. Microsoft does offer a Surface Pro 3 Docking Station with an additional three USB 3 and two USB 2 ports, along with various other I/O extras, although apart from the significant extra expense it does also seem a little perverse to end up transforming your Tablet into a desktop device in the process. The Docking Station’s fixed screen angle may not suit everyone either. Even the Surface 3 provides a selection of angles via its integrated three-position kickstand, while the Pro models feature an even more sophisticated multi-position kickstand that lets the musician set up the screen anywhere from near vertical to near horizontal, the latter perhaps being most suitable for using the touchscreen device to mimic a mixing desk.

No-one would expect any of the Surface 3 range to offer anywhere near the performance grunt of a modern desktop PC capable of 300 or more simultaneous plug-ins in a DAWbench test, but an i5 SP3 might manage perhaps 120 of them with a conservative buffer size of 256 samples, and maybe 70 or so from the Surface 3. When it come to audio performance it’s generally good news, but not without a few hiccups along the way. As with all mobile computing devices, there tends to be a trade-off between performance and temperature — there simply isn’t enough space in a skinny tablet case to install multiple cooling fans. Although beautifully engineered for burst performance, if the Surface decides that your audio software is pummelling its CPU too hard on a sustained basis and therefore getting too hot, it will significantly throttle down the processor speed until the machine cools down a bit, bringing your song to a stuttering halt. You’ll just have to be a bit more restrained with your plug-in usage to avoid such scenarios.

Of course the biggest news when using a Surface is its multi-touch capability. While built-in to Windows 8.1, it only makes sense to have it on offer when you have a touch screen, which is why so many musicians got frustrated with Windows 8 in the past. However, while Surface/Windows is a match made in heaven, when it comes to software multi-touch capabilities, it’s still not exactly a level playing field. Touch screens work beautifully with apps designed specifically for them, but when it comes to the DAW GUI, all bets are still off because most don’t specifically support touch-based screens. It’s a classic chicken and egg situation; if few musicians are using touch screens, why should a DAW developer go to all the time and expense of adding specific touch-based features to their software?

Thankfully, Windows 8.1 is written such that in most DAWs you can use single touches to select menu items, as well as swipe, scroll, pan and flick. Many also accept two-finger pinch/zoom gestures, although drawing with the finger tip for creating automation curves and so on works in some applications but is ignored in others. Given the size of individual items on the Surface screen (buttons, sliders and so on), those with less than dainty fingers may still find the going frustratingly precise. However, the Surface Pro 3 does include the beautifully-designed Surface pen (it’s an optional extra for the Surface 3), which makes selecting small on-screen items a lot easier. The pen also has a handy right-click button, so even the clumsiest among us may not have to resort to a mouse for much of the time.

Sadly, multi-touch audio software is still somewhat rare. Sonar X3 lets you mix with all your fingers, and even offers larger than normal effect panels for those with fatter digits, but most don’t. A few third-party developers also offer adjustable size VST plug-in effects (such as Cytomic Audio’s most excellent The Glue compressor, and the entire Melda Production range), but again most don’t. You could say we’re currently just a little touched!