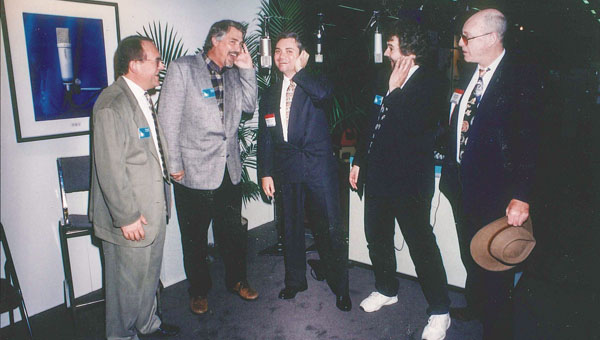 As Røde Microphones’ founding parent company Freedman Electronics heads into its 50th year, we revisit our interview with Røde boss Peter Freedman from Issue 33 (2004) where he recounts Røde’s rise from the ashes of his father’s nightclub installation business, to the path of the international success story it is today.
Pictured is Russell Palmer, Frank Kelly (Event Electronics), Peter Freedman, Ted Keffalo (Event) and Colin Hill from NAMM 96.

My father’s greatest love was always audio electronics. My mother was Swedish and they moved from London to Stockholm before I was born. He was chief engineer for an electronics/telecommunications company in Sweden for a number of years before being offered the opportunity to take on the distribution of Dynacord products in Australia. So in the mid ’60s we emigrated to Sydney and he opened up Freedman Electronics in Liverpool Rd, Ashfield.

My earliest memories were in my old man’s workshop. As a teenager I’d work for him after school and on weekends… What’s not to love? It’s nightclubs, it’s glamorous, it’s late nights… it’s a young man’s paradise.

I loved my Dad but we were always knocking heads. I was always arguing that we should expand and he’d flatly say, ‘no’. So after my Dad died, the first thing I did was borrow a lot of money to build up the business. For the first couple of years we did alright but when the economy took a hit in the late ’80s, I was sitting on about $400,000 worth of debt when all my sales dried up — everything came to a grinding halt.

I thought I was going to have a heart attack at this point — I was 108kg, the bank took my house, I’d f**ked my father’s business… I wanted to kill myself for a while there. But what can you do? You have a family, commitments to staff — you might want to run away but you can’t.

A turning point came when I employed Colin Hill [who passed away in 2013]. One thing I knew is that to get out of trouble you need good salesmen. Colin was that gun salesman and gave me the breathing space to get some perspective.

Back to 1981; I went to a tradeshow in Shanghai and saw what looked like a Neumann U87 copy — I bought one as a sample. At the time we weren’t in the studio market. I’d sold the odd recording mic but there were hardly any home studios at that time. So I stored this mic away. Around 10 years later when I was thinking about what else we could sell, I pulled the mic out and I said to Colin, ‘take this around to some of the shops and see what they say’. He came back and said, ‘there’s a lot of interest in this thing’. So I brought in 20 of those Chinese mics and… they were shit — noisy, two out of the 20 weren’t working at all. So we fixed up the parts, made a board mod here and there and got them to a point where we could sell them. And that was the beginning of Røde.

On another trip to China I found another factory that was making a slightly better product. So I got samples from them and that was the beginning of the NT2. We made some mods, made them look a little bit more acceptable and started selling those in Australia… maybe 100 a year.

I went to NAMM in 1992 and walked around the exhibition with an NT2 in my pocket — like a guy selling watches. I met a few people there but there was no real interest. So I traipsed around the streets of LA. My first stop was to a few studios — like Capitol, Ocean Way and A&M. Obviously they’re big-name studios, but I just rang them up, put on my best Paul Hogan accent and told them I’d love to have their opinion on this mic. They were nice, and I started to get names, which I dropped when I went to music stores in LA. After visiting various places without luck I went to West LA Music and probably spent most of the day demo’ing and talking to them. Eventually I struck a deal to supply them 100 mics! That just blew me away. That was like a year’s worth of sales in Australia, and to one store — in LA! It was then that I knew we were onto something. I walked out of there with tears in my eyes thinking ‘this could be it’.

From there we had the nerve to exhibit at the following year’s NAMM in 1993. We took a little booth jammed between a guy selling steel drums and a huge garbage bin — it was like a joke. But in the first three hours we stitched up distribution for Japan, Canada, England, France… we’d cracked it. We subsequently appointed Event Electronics as our US distributor who were a major part of our success in the US market.

The NT2 design was based on a circuit from a guy I consulted in the US called Jim Williams, from a company called Audio Upgrades. Jim showed me the difference good audio design could make — really good FETs, better components, better layout, nice electronic balancing… And that completely changed the mic into what people loved about the NT2 — it became quite a special product. That was the building of Røde; that circuit, our quality control and our marketing.

Not long after, when I started working on the Røde Classic I thought, ‘you know what, we can actually be a real microphone company’. From then on my aspirations were to build everything to do with the product.

We outgrew our little warehouse in Rydalmere — a few Laminex tables and a few women sitting there with soldering irons. From the proceeds of the NT2’s success we bought an ex-RTA technical workshop in Rhodes. That was the start of Røde becoming a real manufacturer, with real machinery, test gear and engineering staff. For example, during that time I bought our first ‘pick and place’ machine for automating the building of printed circuit boards. That was a big deal and really improved the specs of our mics.

From there we moved to Silverwater. I bought a new factory and spent over a million bucks doing it up so we could start making our own mic capsules in house.

Røde has built up a huge brand name. We also have an edge on technology; we invest millions into R&D — something you can’t do if you’re selling $20 mics. If it’s a Fender or Gibson people aspire to own, I don’t see them flocking to buy Chinese guitars just because they’re cheap!

I’m not just in this game for the money. I love music. I love great audio design and I love making things. I think Røde is writing its own history and in the end I’m after the ultimate accolades. I’m a bit like a muso who wants to be on the top of the charts. I want the company to become one of the all-time legends. PETER GARRETT ON TOUR WITH JPJ HOLD YOUR HAND OUT, NAUGHTY BOY Recording Inside & Outside The Home With Garth Richardson