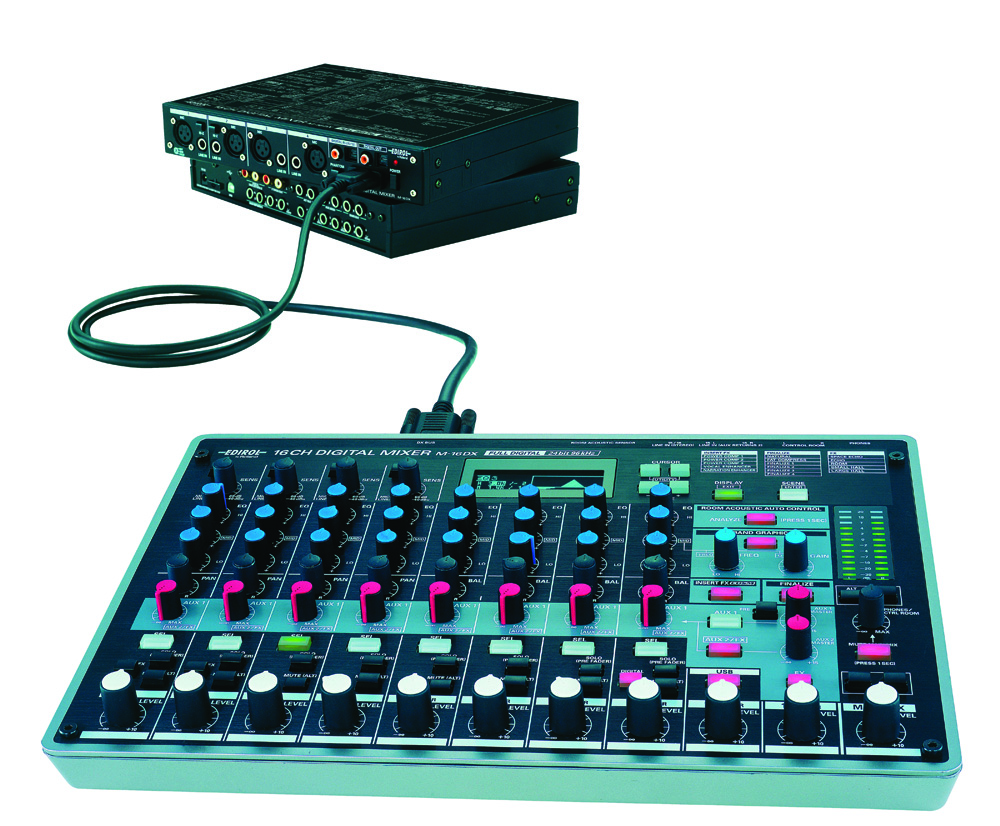 So it looks as if most manufacturers are travelling down the ‘combined controller and interface’ route. Not to be left behind, Edirol – Roland’s alter ego, which is increasingly producing some interesting (and not just cheaper) gear – has released the M-16 DX and M-10 DX; mini digital mixers attached to a USB 2.0 interface.

I took the M-16 DX for a spin and thought it was quite cool. It features four mic preamps with global 48V – although this can be changed to be just Pre’s 3&4 via the controller (the first two being ‘Hi-Z’ capable). Then there’s a further eight inputs controlled via stereo channel strips on the controller. Inputs 11&12 can be assigned to the S/PDIF or TOSLink digital input, 13&14 represent the host computer output and Inputs 15&16 are designed to receive line level only. The cool part is the control surface is a separate unit from the interface section. The controller can sit on your desk, with your mic pres and inputs bolted into a rack. The system also offers a handful of processors such as insert compression and EQ, along with a Podcasting-centric ‘Narration’ processor and vocal enhancer. Eight of the control surface’s channel strips also offer three-band EQ with a fully-parametric midrange and there’s a cute little OLED display providing critical parameter feedback along with a 12-segment LED master meter. The 16-band graphic EQ can be put over the control room output (situated on the controller) or main outputs (found on the interface unit). What’s extra cool is the Room Acoustic Analyzer.

Aimed at the bedroom Beethovens, the system will measure your room’s acoustics via a small microphone built into the controller and adjust the output signal accordingly. You just have to hold the controller in your mix position while the M-16 DX plays some pink noise and settles on an EQ setting. There’s even some ‘Finalizing’ processing for some rudimentary compression and limiting on the final output. Compatibility extends to Windows 2000 and up, along with Mac OSX. Bandwidth is a full 24 bits with sample rates up to 96k supported, although you’ll lose some processing at 96k. Hell, there’s even I/O and Aux sends for an external stereo processor. Cute and nifty. – Brad Watts.